In the afternoon of September 11th, All SIRUI's staff actively responded to the company's love call for donations and appointed a Worker's Representative to the hospital to visit the suddenly ill member- Kong Lingbing.

In the afternoon of September 11th, All SIRUI's staff actively responded to the company's love call for donations and appointed a Worker's Representative to the hospital to visit the suddenly ill member- Kong Lingbing. 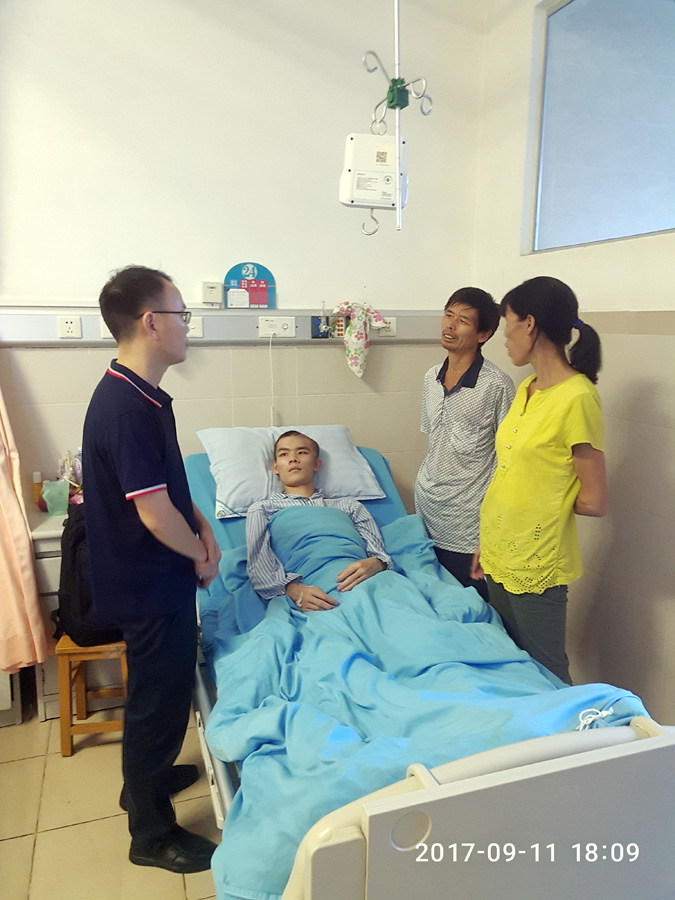 In the middle of last month, the worker Kong Lingbing fell off the bed in his let at night unfortunately, which made his left temporal parietal lobe bleed, subarachnoid hemorrhage in ventricle and caused brain hernia. He is now under treatment in the hospital.

After communication, we knew that his parents were farmers without much earning. This precipitate accident had cost all their savings, and made this difficult family even worse. The people of the family had borrowed more than 80 thousand RMB from their friends and relative, and can not find any other way to get more money for the increased hospital treatment expense. Facing the following high medical expenses, his parents felt helpless.

Currently,Kong Lingbing's illness is getting stable basically. Confirmed by the doctor, he still need to stay in the hospital for further treatment, and would cause much more expense. Knowing this situation, SIRUI's leaders called out all the staff to offer their love by donate to Kong Lingbing, and all the staff responded actively. Leading by the SIRUI President - Mr. Li Jie, the donation had been collected with tens of thousands after one week, and had handed over to Kong Lingbing's parents at once.

The disease is heartless, but the world is full of love. During donation, not only the closely associated workmates, but also the non-recognized workmates offered their love to Kong Lingbing actively. Every cent is taking the concern and care of the SIRUI family, and every greeting is sending all SIRUI staff's wish to Kong Lingbing - hope him getting fine soon!